I secretly love a good long layover, I treat it as a challenge to see how much I can cram in before the next flight! This was the beginning of my Safari trip, I flew from London to Tanzania with an 18 hour layover in Cairo.

I know what you’re thinking, Egypt is not safe for solo female travellers, and it’s true – I’m not going to deny it, I felt unsafe while I was there. But there are ways to prepare yourself for it.

I’ve heard stories where other female travellers would book an uber from the airport and after getting to know their uber driver, they then keep the meter running for their uber driver to hang out with them all day, and escort them to places. I don’t see anything wrong with this if you feel you are not in danger. I personally wouldn’t use the taxis service, as they will try and rip you off. I was very lucky to have an Egyptian friend who arranged a personal driver for me while I was there for less than 24 hours. He was so nice, he picked me up at the airport at 5am, dropped me off at my hotel, then picked me up again at noon to start my sight seeing and dropped me off at the airport later that night, all for less than €40 for the day! You can probably get it cheaper, but after living in the UK for so long, that was a small price to pay for one’s safety. I honestly don’t know what I would have done without him. 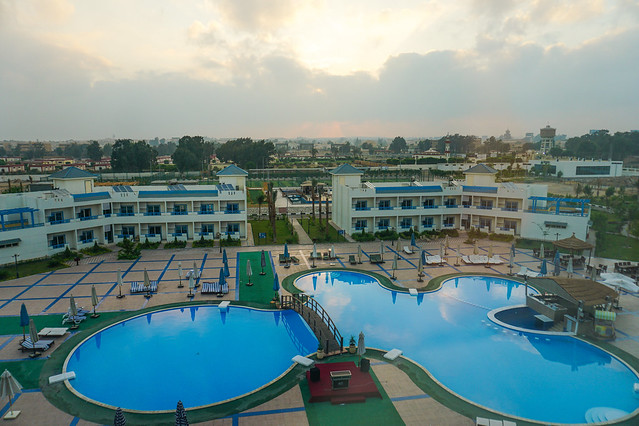 Sunrise view from my hotel. 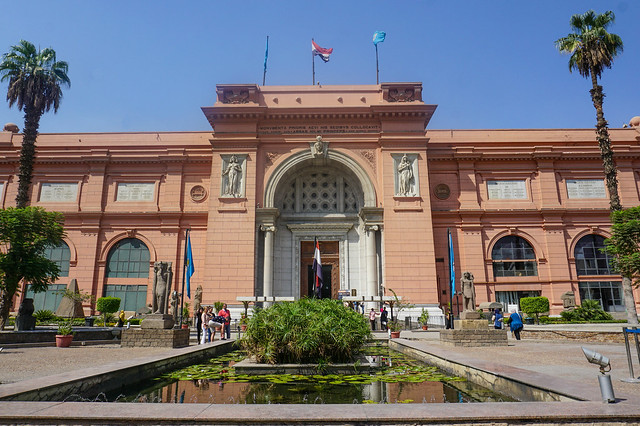 First stop for the day – the famous Egyptian Museum! Here you will find Tutankhamun’s  tomb and other mummifications. Along with lots of antiques and artifacts that’s left in Egypt, but a lot of it was also taken from Egypt to be placed in other museums around the world, during the revolutions. 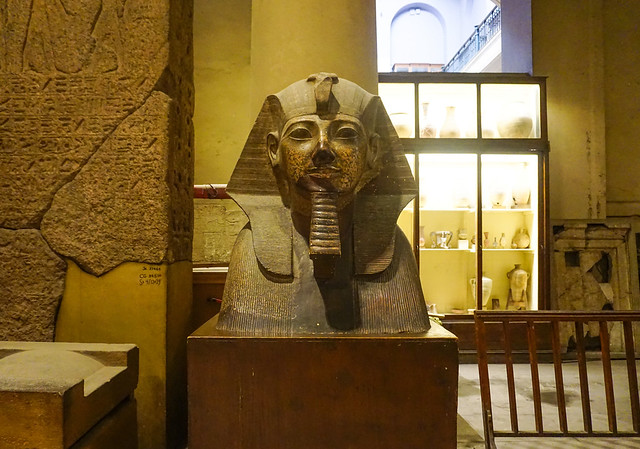 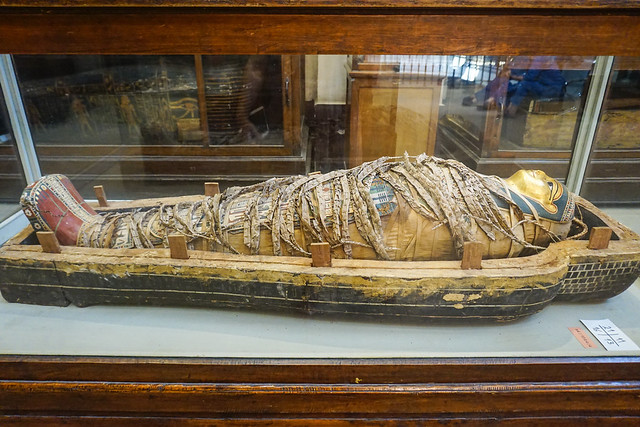 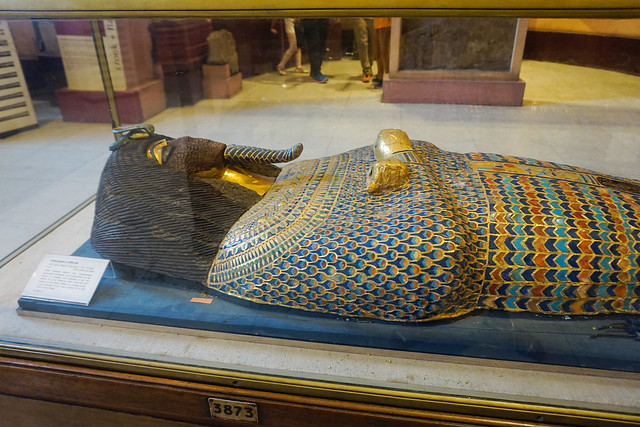 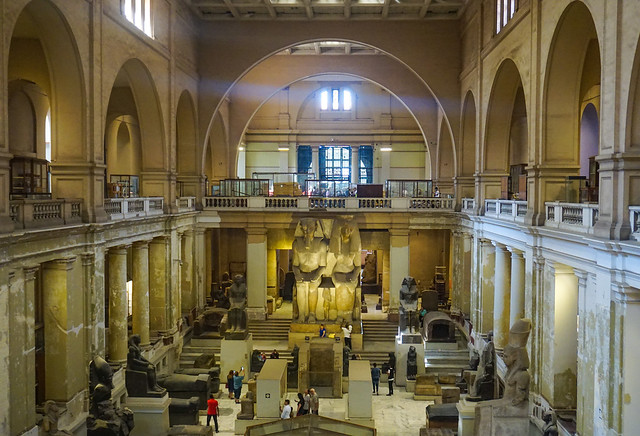 Honestly, you can spend hours in this museum learning about the artifacts and reminiscing those days in History class learning about Ancient Egypt. I spent a good 2 hours in there before heading out to my next destination. Entry fee into the museum is roughly €6, and there’s a small fee to pay if you would like the take your camera in and take photos – or else security will make you leave your camera outside the museum.

As we made our way to the Pyramids, my driver was telling me the history of Cairo and pointed out the main attractions, but as we were in the car moving I wasn’t able to capture much of it. I did get to see the Nile River, and we did drive over the famous ‘6th October’ Bridge, which in itself held so much historical reference. ‘The bridge to freedom’, as my driver puts it, the date that will forever be known when the Egyptians won over Israeli army.

I was just as fascinated by the amount of billboard advertisements along the bridge when you’re driving down it! It’s definitely a sight worth experiencing!

As we’re driving towards the Pyramids I can’t help but think we were driving towards the outskirts of town and almost a run down area? It took me by surprise that the roads there were not paved and lots of people coming up to you selling products – even while in the car! It was such a shame as you would think it would be an expensive area of the city to get a great view of the Pyramids?

As we reached the Pyramids, my driver had recommended me a tour guide to take me around the Pyramids. Now, I’m going to be completely honest here, I felt I got massively ripped off at this point and felt discriminated for being a female. As I met this tour guide, he quickly gestured me to get on a camel and off we went – the tour had started without my consent. I thought this was odd, so I asked him to stop and asked him to confirm the cost of the tour he was taking me on, he looked surprised that I didn’t know and said the cost was US$200. At this point I got increasingly mad and told him to get me off the camel. However, I was with 2 guides who were men and they were getting increasingly mad at me for leaving and refused to help me off the camel – which by the way you can not get off on your own! Feeling helpless and poor (I did not budget for this amount at all!) I told him I literally don’t have that amount of cash on me and eventually he agreed upon US$120.

In hindsight, I still feel that was a lot of money, as I could have easily spent close to nothing to see the Pyramids and still have gone inside one of them. But I was feeling scared and outnumbered by them, and didn’t want to make the situation worse. I absolutely hated that feeling. They would not have treated me like this if I were a male. However, after speaking to my Egyptian friend she assured me that the price I paid was justifiable as it was a private tour, with 2 tour guides, for 2 hours, with entry to one of the Pyramids, during sunset, and I had a camel and a horse to myself.

At least I managed to get some good pictures out of the experience! 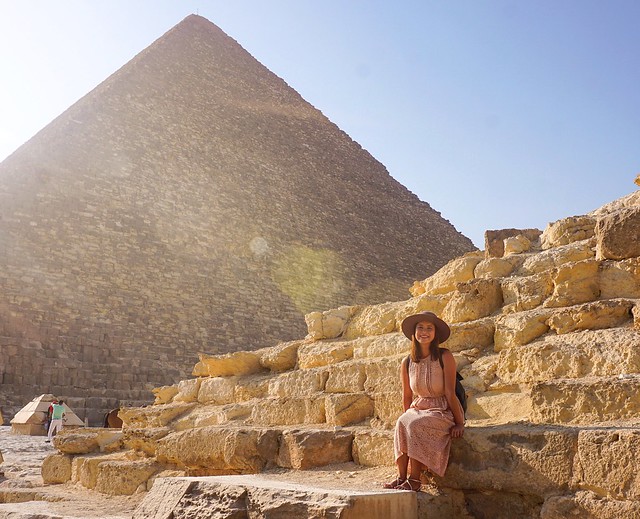 You’re not suppose to climb the Pyramids, but my tour guide somehow allowed me to. 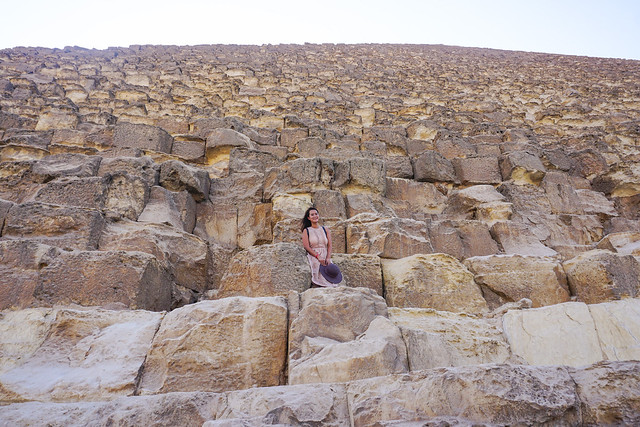 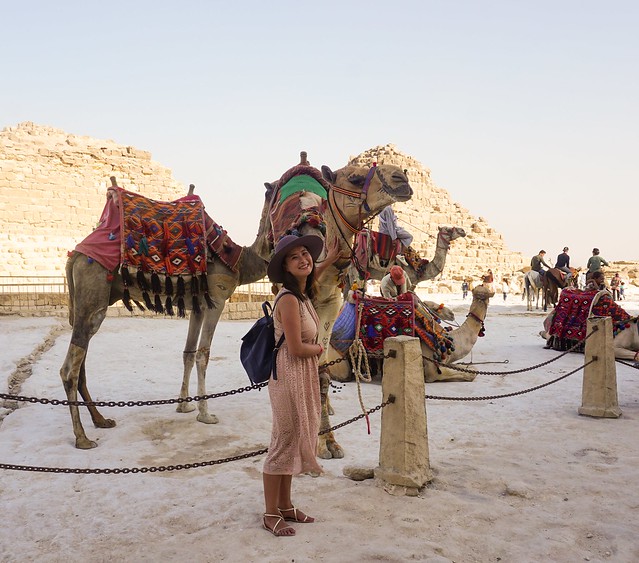 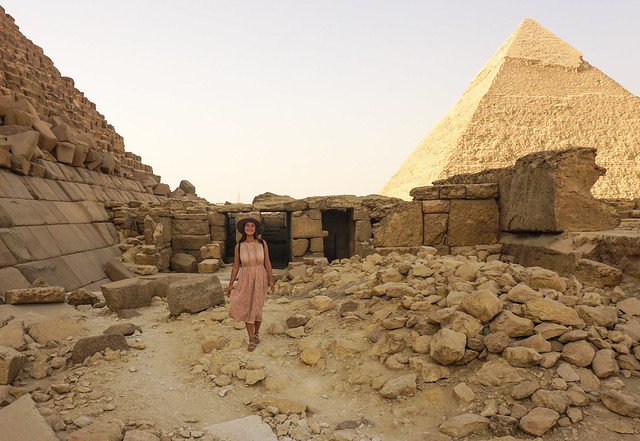 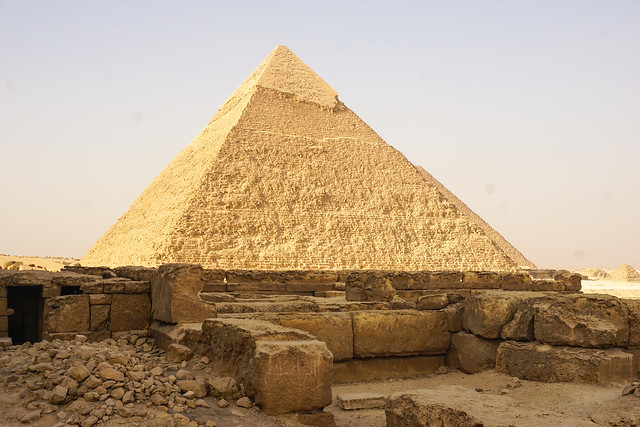 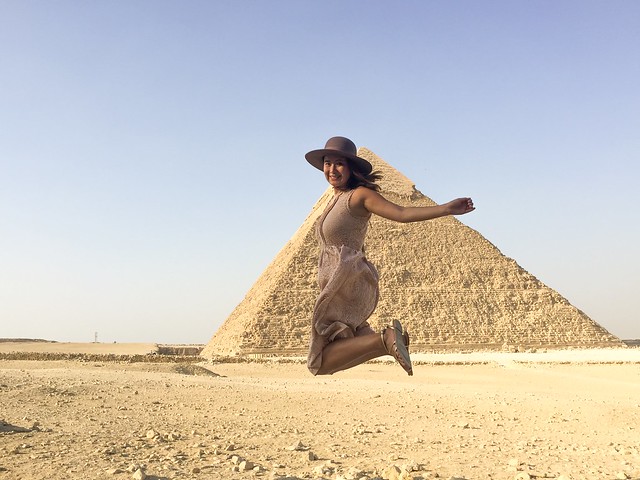 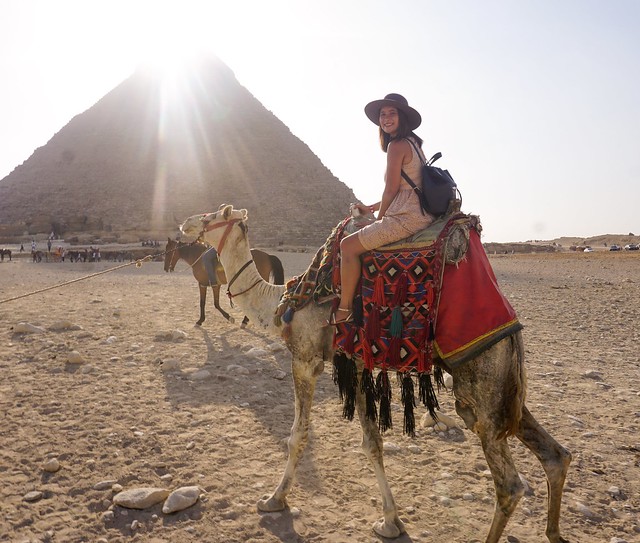 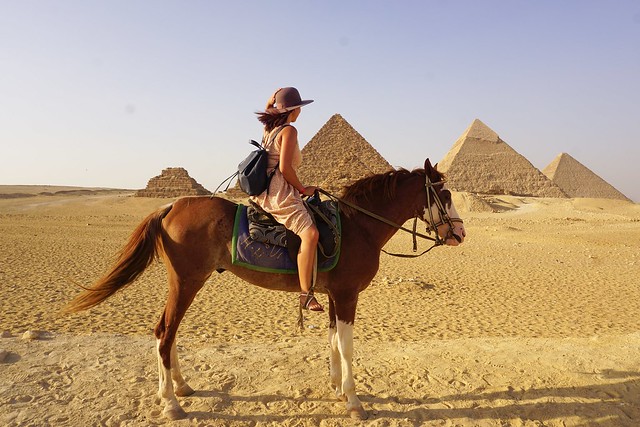 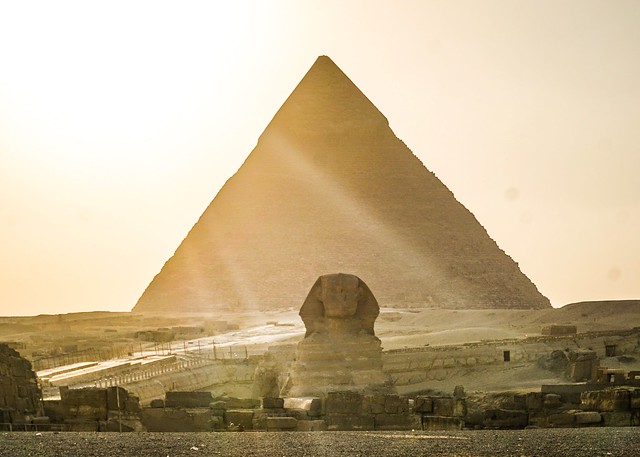 Watching the sun set over the Spinx and Pyramid of Giza made me feel it was worth every cent I just spent.

After that, I literally had no more money and asked my driver to drive me back to the hotel to get ready for my next flight, which was lucky too because the traffic in Cairo is horrendous!

I can not wait for my next Egypt trip! I think there’s so much to see and do, and although the culture is questionable, I am just as eager to learn and embrace everything that comes along with the country!

You can continue to read about my safari trip here.