Istanbul is the last leg of my 2 year adventure.

I had such a bitter sweet time in Istanbul, part of me was getting anxious about returning home and the other part of me was excited for the next chapter of my life.

I’ve blogged previously about the reason why I left Aus to the UK, about running away from responsibilities and in general running away from being an adult. After being away 2 years from home and familiarity, it almost becomes an addiction. This motion of not caring, not taking life serious and this selfishness of only looking after yourself. And I’ve never been happier. Maybe this is the secret to happiness? Is to not think too much about your next steps but to think about your next destination into happiness?

Whether it’ll be a new house or car, it’s still a next move into happiness. I understand that everyone has different goals in life, and my goals in life are certainly different now than they were 2 years ago. Especially in the last two months, I feel that I’ve found solace in nature, and have learnt to enjoy my own company while travelling alone. I’ve rediscovered the enjoyment of reading books, mediation, cooking, gardening and eating healthy. Overall, I realised I don’t need much in life to be happy, and to really cherish my relationship with the people I care most. Actually that would probably be the hardest lesson I learnt in life, is balancing time with people, work, and time for yourself. You don’t want to see people for the sake of keeping in contact with them, you should have more genuine approach in getting to know them on a deeper level. Because isn’t that why we’re all still living? To be seen, heard and loved?

As I said, I had a very spiritual past 2 months and things were starting to become clearer to me….anyway back to Turkey.

After my wonderful time in Cappadocia, I flew back to Istanbul, amidst the chaos of catching a taxis to my hotel, it was the safest way, seeing as people had warned me about not using Uber. Istanbul strikes me as an exotic destination. I do find the city oddly beautiful, amongst its many grand mosques and interesting architectures, but I did have to remind myself of its predominant religion. Even though Istanbul is the tourist capital of Turkey and they are not strict on dress code, I still believe in respect for the religion. I chose to be covered up whilst my time there, I suggest you do the same.

I had an incident during one night in Istanbul, I won’t go into details however I will share that travelling solo as a female almost landed me in danger. I will take accountability for it, but at the end of the day there will always be people who will take advantage of your kindness. And you should always follow your gut feeling.

I spent roughly 48 hours in Istanbul and got the chance to see everything I wanted. I highly recommend you stay near the Old Town as Istanbul is pretty big and you wouldn’t want to be wasting time in traffic nor on public transport getting around.

In the main square you will find, the famous Blue Mosque – Sultan Ahmed Mosque. 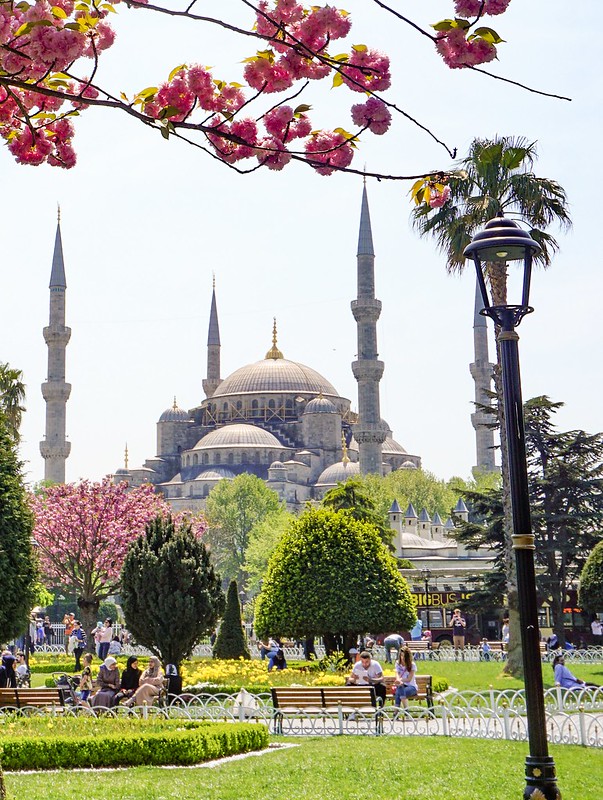 I didn’t get the chance to go inside the Mosque seeing as every time I made my way there it was praying time.

Instead, I went into the Hagia Sophia, which is approx. €8 for entry. 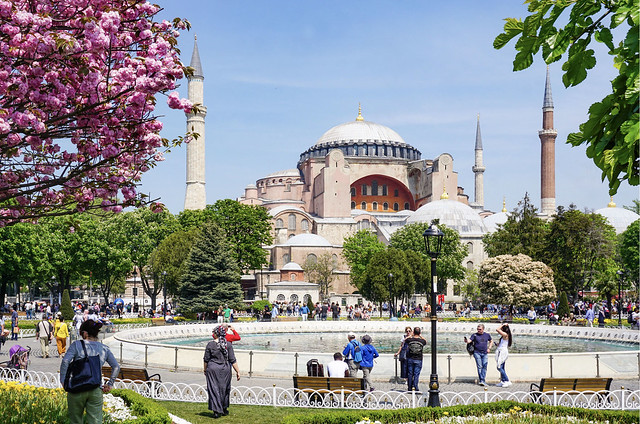 I have to say it’s worth waiting in line for, it’s such a beautiful structure and also peaceful? Even though it was completely packed, but for some reason I felt at peace. 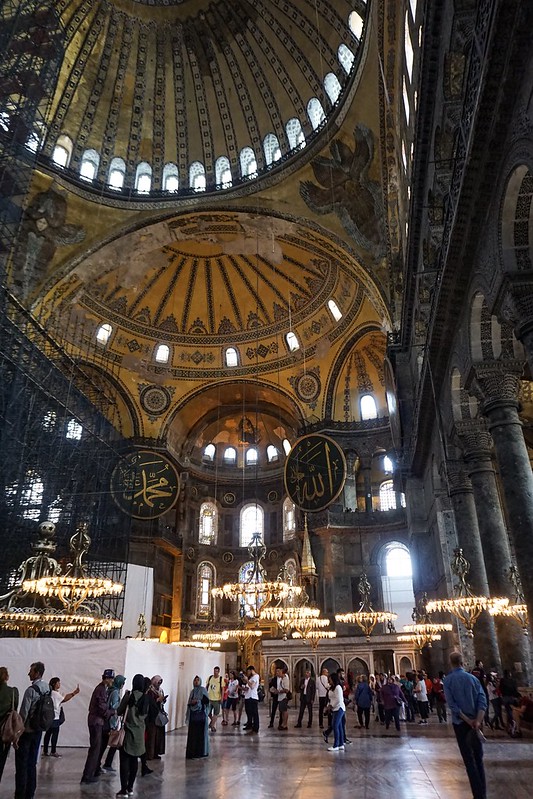 Around the corner from the mosque, you will find cute, colourful wooden houses. I found it intriguing that Istanbul tends to upkeep all architectural styles instead of modernizing it, making it sure a pleasure to go exploring. 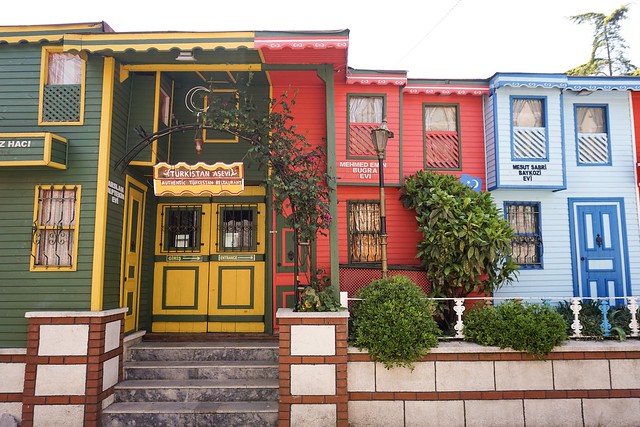 Markets in Istanbul – great for spices! 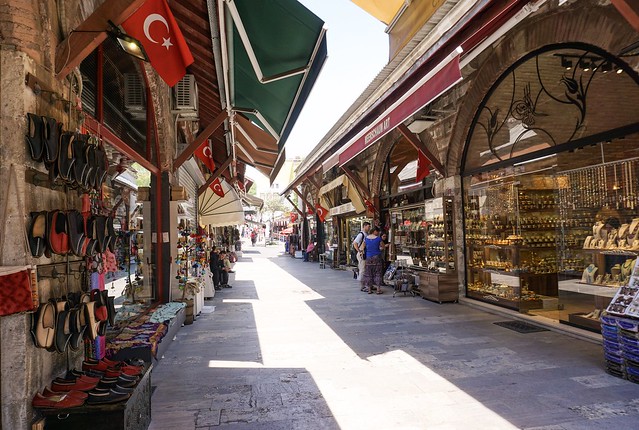 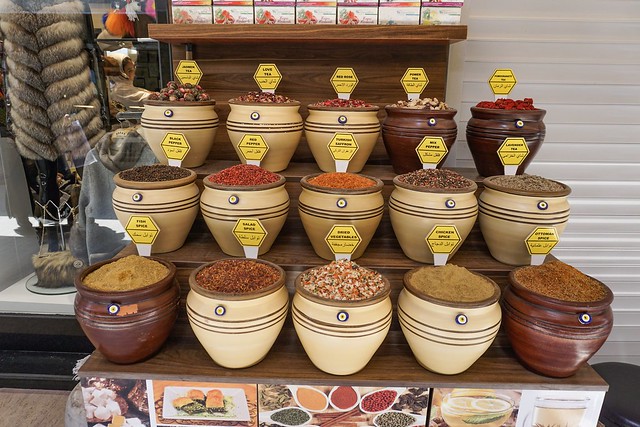 And of course the famous Turkish tea which I kept asking for refills! 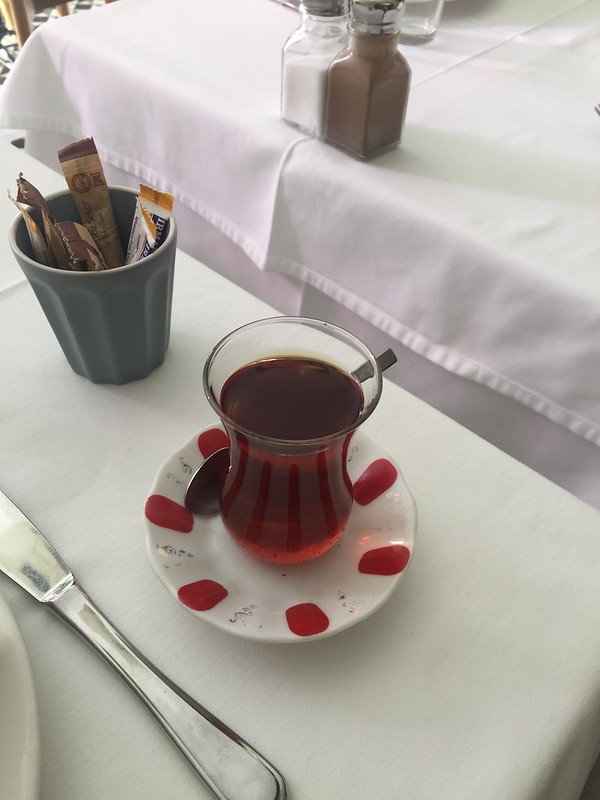 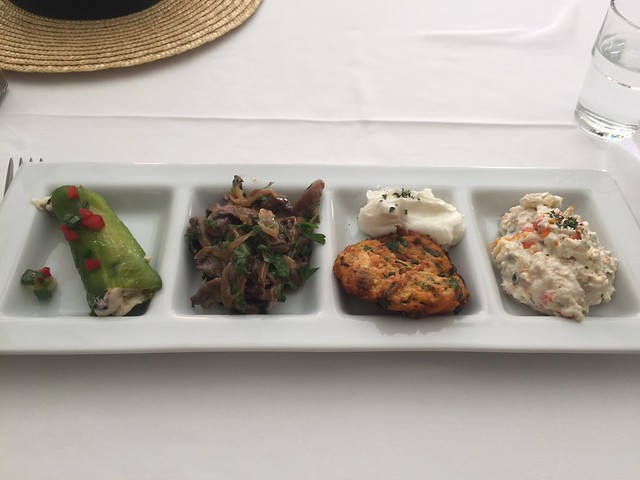 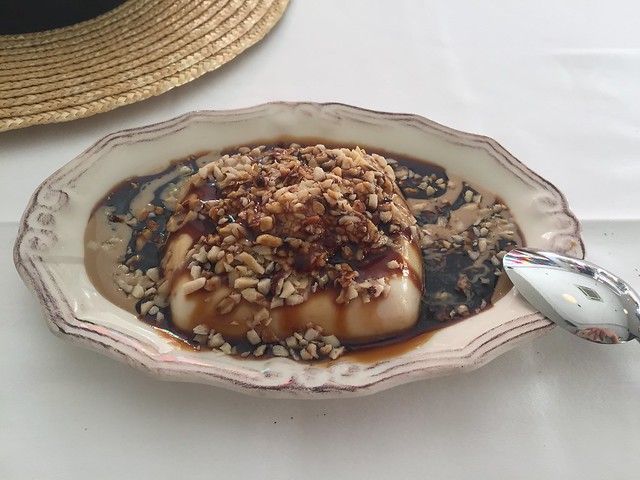 Stopped by Hafiz Mustafa for coffee and chocolate Baklava. 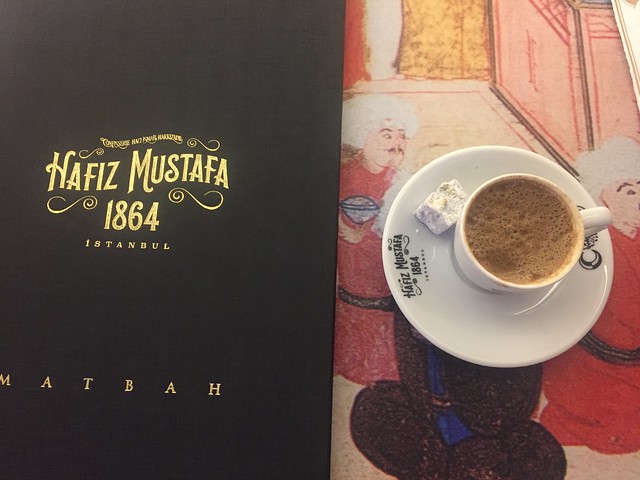 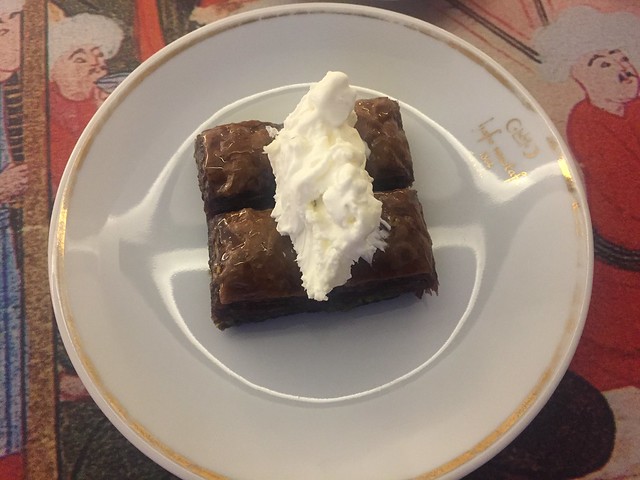 Checked out the romantic Galata Tower. 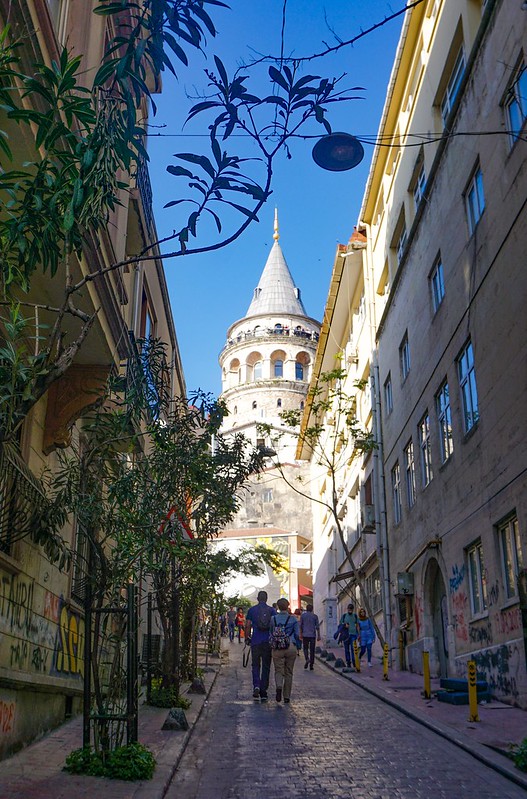 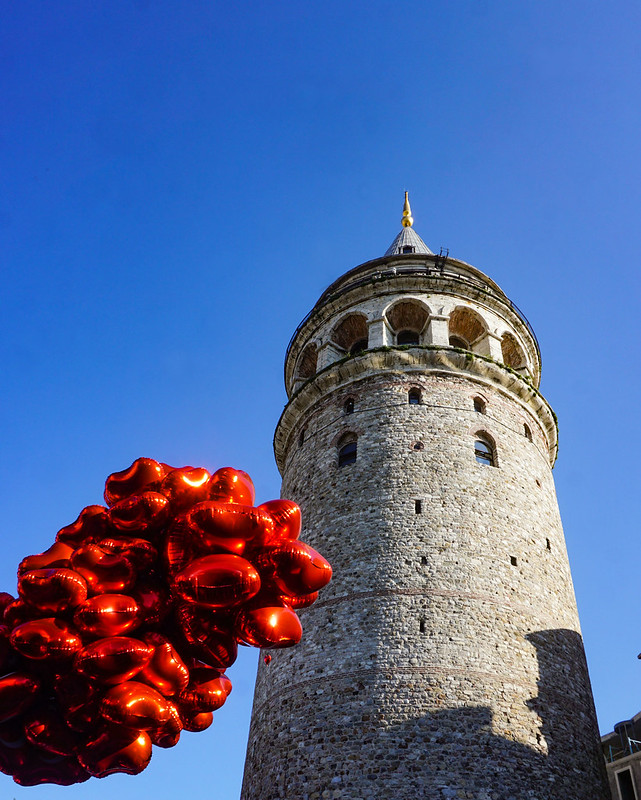 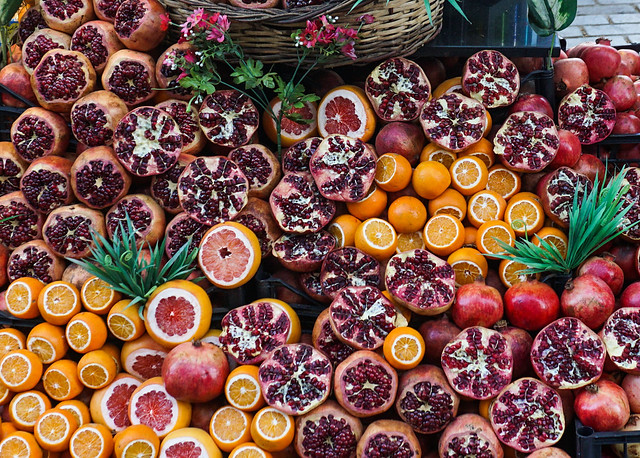 I used a travel card for public transport but taxis are generally quite cheap too, but be warned about the traffic!

I loved my adventure in Turkey, but it was too short, as Turkey is such a big country filled with so many beautiful places to visit!

Until next time Turkey! 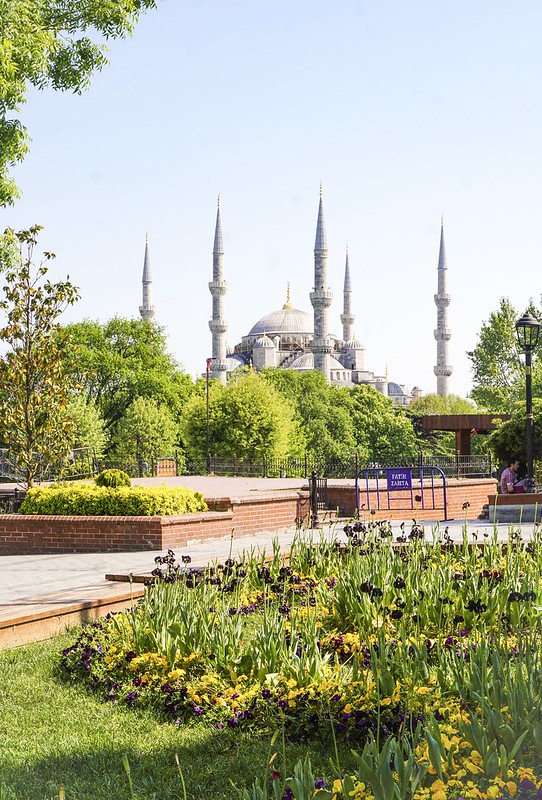 2 thoughts on “Can I tell you a story about the time I went to Istanbul?”